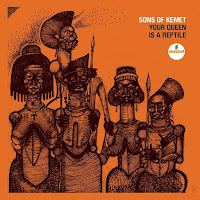 This past month Ive been enjoying the sounds of British quartet Sons Of Kemet from our capital city London. This record, their third, is a busy Jazz scenario of unsettled landscapes in flow, occasionally smooth but mostly agitated, engulfed by worldly sounds and vibes that surface their identity. Its cover may be a link to a tribal heritage, something I don't quite hear in the music directly. For all its obvious cultural influences most of the music feels like the madness of a city whirling around an individual.

The ceaseless drums shape up every living moment with lively, energetic pacing that constantly bursts with frantic fills and moments of disorientation that always fall back on the rhythm. Armed with a deep, soft and brown restless Tuba tone, it pumps and plods away with binary pacing that leaves gaps for the Clarinet and Saxophone to fill. On tracks like Angela Davis it becomes quite fast, clustered and maddening as the intensities build with little respite. It is always the Sax that seems to find a human narrative in the atmosphere, sounding rooted as its jam rises above.

These songs drive and evolve like jam sessions, starting with a certain intensity and temperament that moves from one degree to another other the five to seven minutes they last. Occasional obvious grooves emerge but mostly its a bustling jive of instruments jabbing their voice into the fray to be heard. On its smoother cuts the toned down nature lets the lead Sax have a flow of melody but otherwise these notes swing rapidly between instruments. The calmer demeanor is always preferable.

The different degrees and flavors between songs will have you plucking favorites but the album makes a flash with two songs. On Marrie Phipps Clark and Doreen Lawrence a London Caribbean accent brings some social political commentary through recited poetry that gives focus to the instruments. These parts strips the music of its sometime monotonous tone and opens up to its other dimension, the song titles, all of which are names of female social-political figures. Ive enjoyed this record quite a lot but a smoother degree of Jazz music is more to my liking.