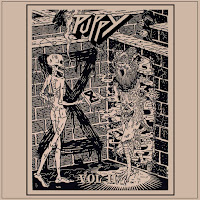 If a dose of 90s Alternative revival is your cup of tea then English rockers Puppy and there "Vol II" EP may just be for you, however to label them as a revival band would be a disservice. Puppy's style, sound, aesthetic and tone is uncannily alike to many acts of that era but theirs is a fresh and faithful artistic expression that nestles neatly between many names while still feeling like its own master. It kicks off with the most out of turn track "Entombed". Its slow and steady textural two note groove has echos of Groove Metal but its soft, welcoming distortion tone and singing style makes it very comparable to one of Metals brightest bands, Ghost.

The rest of the record embarks on a less metallic voyage, taking an emotional narrative that in many moments resonates like The Smashing Pumpkins. These are steady, easy going songs with simplicity in mind, a tight arrangement of riffs that flex between expansive chords and simple rock steady grooves. Acoustics intersect and with a lighter distortion the band effortlessly transition between subtle intensities, making for great craft as the songs flow soothingly. Its the singer who pulls much of the tone together, with a weaker, soft and gentle voice he comes with a meekness that exudes honesty in the emotions conveyed, making the instrumentals feeling complete.

Ending with a number devoid of percussion, a sombre acoustic guitar is intersected by soft harmonizing distortion guitar leads. It occurs to me that the short record, twenty minutes, starts in one place, ending in another. Kicking off with groovy metallic energy and transforming to quite a calm and soothing affair. Its all terrific, not much to flaw other than its short run time. The production is solid and everything feels cohesive on this five track release. This band has a promising future it would seem.