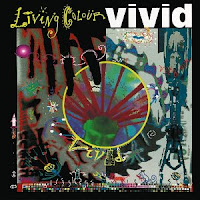 The magic of shuffle kicks off another journey as a track other than Cult Of Personality plays and captivates my attention. Its the perfect spark to lure me in and over the past couple of weeks Ive grown to adore this record! When first digging the mood and vibes I thought about how much I loved nineties music, of course this record was a couple years before that decade but Its shades of Alternative and Funk Metal now sound like a precursor to what would blow up in the coming years. You could even trace back Groove Metal back to some of the stomping riffs that appear on this record too. Its been a revelation in some ways, another piece in the puzzle, a key one too.

The group formed in New York a few years prior to this debut album and they arrive on the scene with a really powerful and well formed sound that fuses elements of the aforementioned genres with a Hard Rock baseline, some flavors of Funk and periodic upbeat inflections of cheesy eighties Pop vibes. They pull it off well and roar out the gates with the timeless Cult Of Personality, beyond it an impressive set of songs bring a diversity of well executed ideas thanks to a solid rhythm department. Its led by slamming drum beats that have a little Hip Hop sway to them and alongside punchy baselines that get a couple of songs to step up and flex phenomenal bass playing.

Singer Glover has a fantastic range and pulls off some immense high pitched notes at key moments, he is a well rounded voice at the forefront, lively and emotionally invested. The guitar work is sublime, a range of styles even spanning as far as a Country tang give the songs there tone. The lead playing lines many of them with electric guitar solos that erupt and roar, bursting to life with electricity, showing off technical prowess and slick inspiration. They also drop in with hard hitting riffs and grooves that will have you slamming your head back and forth on many an occasion.

To me, the record walks on many paths and feels like a journey round the world as it explores many ideas, tones and temperaments. The lyrical content and theming also hits a diverse collection of thoughts and problems having personal perspectives, strong feelings and a outlook towards social situations and political problems. The two aspects gel together fantastically and make for a record I can't help think may be somewhat lost to time. I wouldn't say its a classic but it really has a pivotal feel to it, a stepping stone towards the immense music I adore from the early nineties.