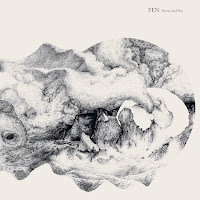 Years have passed since Dustwalker and Carrion Skies, two records I was keen to check out but felt far from the magic of their debut The Malediction Fields. Apparently I have been oblivious to their fifth full length entitled Winter, released a couple years back. This short, three track EP was just the right dose of music for my tasting. To no surprise Fen's sound is rooted in the period where Black Metal first diverged from its second wave and with earthly tones and naturalistic inspiration the trio conjure three tracks that play with a familiar theme of light and darkness, swaying between the two.

The mostly darkened avenues the music walks is rough and raspy, throaty howls yell over loose blast beats and gritty distortions that feel earthly and muddy in the mix. The production is raw with its crunchy guitars and muddy noise, the clashing cymbals cut sharply through but with a creek of chemistry to tie it all together. Its got a sloppy sound but that is the charm to some extent. Its earthly, human and perhaps mystical.

It has its heavy moments that conjure the atmosphere of natural wonder in the darkness of a moon lit night setting over forests and moors but the light upheavals mostly emanate from the peaking melodies that transcend the gritty foundations. The music builds to an eruption of triumphant lead guitar queued by clean and humbly imperfect vocal lines that break up the screams and howls, bringing in that uplift of light from an overwhelmingly darker and dusty sound across its span.

Its rises of the light are brief and infrequent but the overall structure makes for a charming midsection of acoustic guitars that usher in cultural roots. It should be pointed out that the EP is essentially one big twenty minute song. The opening 8 minutes blister through shrill and windswept bustling furies of energy and its mid section acts as an calm between storms. The third act infuses chunkier elements of groove and a bigger emphasis on the lead guitar that brings the song to its climax, one that is drawn out to the end. Its quite the epic piece of music and one I have fondly enjoyed! This more focused Fen is more to my liking.