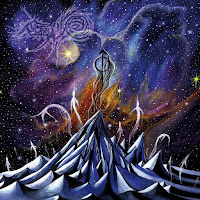 It was once the experience of a music lover to flick through crates of vinyl sleeves in a dusty record store, looking for something to land your attention and empty your wallet. In the digital age it is Bandcamp alone that has managed to recreate that market place feeling and so easily am I sucked in to browsing binges. If this illustrious artwork and the promise of "Cosmic Black Metal" isn't enough to lure me in then abandon awaits thee. Fortunately this music matches the class of this modern Black Metal act, a one man band from Portland Oregon. Its got all the shades of Progressive, Post and Shoegaze, not wondering far from the American blueprint, culminating in a sweet experience of darkly voyages into the symphonic abyss.

Two of its four tracks reside more so in the traditional lane. Entropic Hallucinations opens up with a devilish, infesting blast beat and snaky grinding guitar riff played with an allure aided from a sweep effect cruising past its hurtling rhythm like icy winds. Ephemeral Eternities, being the other, also has cunning execution of blast beats with rapid tom drum fire. Going through progressive structures that "follows ones nose" so to speak, they embark on arrangements of tremolo riffs, maniacal drumming and screams both guttural and shrill that check all the boxes of familiarity with inklings of particular bands as influences on this flavorful journey of scale.

The records production to be merited. Phobos Monolith for all its extremities is masterfully mixed to make cushioned and warm tones of all its instruments. They reside within reverberated spaces to amplify its cosmic, astral leaning in theme. The song writing is also champion, it can lock in your attention for fifty minutes as these songs twist, wind, soar and scale. Album opener Weaving The Thread Of Transcendence take a prize for the most progressive track, starting from mysterious embers it stokes a flame that turns into a roaring fire of color as the song blossoms with bright guitar leads and plundering unions with a hurtling momentum stoked by the drumming.

Noumenon rocks the shoegazing strand strongly on a warm and colorful track that almost sways into Alcest territory if it wasn't for snarling, viscous screams anchoring it to darkness. As mentioned before this record has many flavors and they come together sweetly. A very solid record, perhaps just shy of greatness, missing something exceptional. Its foundation is bedrock but never quite exceeds itself. Very impressive, I will be back to check out more of this band soon!