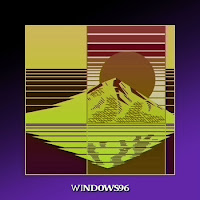 I've always maintained a key interest in Vapourwave, the Internet's own truly international and border-less music scene. The unfortunate problem is quality. This is a genre plagued by low effort releases, often hinged around pitch shifted and time stretched re-sampling. It makes discovery hard but luckily Ive found this Brazilian musician who operates under the Windows96 pseudonym. They have the theming and aesthetics down and I'm happy to report the music is there too!

One Hundred Mornings gets off to a reasonable start with slightly off kilt drum arrangements and quirky synth tones taking up most of the focus. It builds atmosphere and steadily lures one into its particular vibe, a mesh of nostalgia tones and childish wonder. Its kitsch snippets of obscure cartoon sounds bouncing of the multiple layers of resonant synths has it start with its magic muffled somewhat.

As the song Visions I kicks in, the samples draw back and a lead instrument whirls around, dancing in the winds above its clunky drum groove and blocky baseline. Its here that the record gets into a stride, unleashing inspiring melodies and swelling with emotions. Its wobbly keyboards and murky low fidelity tricks find a warm cohesion where the aesthetic and music really start to compliment one another.

The pivot feels somewhat inspired by 80s Synthpop, the chord arrangements and notations of Bliss seeming almost like a Tears For Fears song re imagined through a new set of sounds. Its a very enjoyable record, warm uplifting mellow moods through the lens of nostalgia play, acting as if it resides in a infatuated past. The off kilt and sample oriented components don't hit home as hard but when the real musical composition comes through it shines bright in these lovely surges of swooning melody.