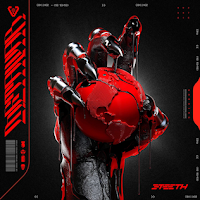 Hot damn do I love Industrial Metal and what a big meaty slab of electrocuted industrious filth this record is! Metawar is the Californian bands third full length and its undoubtedly my cup of tea but I can't praise it for originality. A fine tuned titanium studio production and good songwriting holds it up well against the obvious influences worn proudly here. From Nine Inch Nails, to Marilyn Manson, Ministry to Fear Factory and all in between, everything at play here feels but a fraction away from vibrations and moods conjured many a time before them, however it does have its own stamp.

The one place they excel is with the thrilling eight string guitar sound. Its dense, tight and lavished in a bludgeoning tone that inches towards sounding like moving parts of an industrial piston powered machine of death! They ring out with big chunks of booming momentous noise, taking influence from the likes of Nu and Groove Metal in its rhythmic sense of bounce. Its a delight mixing in alongside the harsh and jarring synths blare out anti-melodies. They feed into the unsatisfied, angry and dystopian feeling of rebellion these songs cry like anthems. The battering drums and deep baselines ram themselves into the condensed wall of noise being propelled your way, its a cohesive force of destruction that batters with its industrial metallic might.

Singer Alexis Mincolla has a firm and defining presence in the limelight. Roaring with fiery, strained screams between twisted, tormented spoken words of infliction he sounds apologetically like Manson. If they shared a third factor its the ability to put a sung hook down in a nature that grabs your attention but living in the shadow of such an artist he only occasionally escapes that mold of seeming like his influence. Its so well executed that its no drawback. If your looking for originality it may only be in one department but when it comes to the music this will easily win over Industrial fans.

At forty six minutes it does run through a fair few mediocre songs. The energy and temperament shifts through aggressive, atmospheric and alien vibes to keep it flowing however after a handful of listens you'll suss out your favorites. Its best comes on a handful of tracks and despite sounding utterly sharp and pounding the songs don't quite reach for the stars. There is much too love here, much promise for this band and if they continue improving I could see this sound being pushed further.