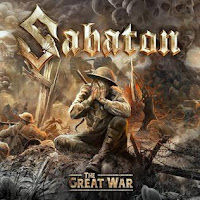 And now for the mighty symphonic gleam of the one and only War inspired Power Metal outfit Sabaton! This album has been an absolute U-turn for me. I checked out Heros a few years back and despite always trying to open my heart to music, I was not swayed. It took my favorite war historian Indy Neidell teaming up with the band to win me over. The united to create a documentary Youtube channel that dives into the historical inspiration behind each song and It really brewed a connection. These guys are history nerds too and now the thematic nature of their music felt very genuine.

It took but two or three listens to engulf me. No longer did these cheesy lyrics act as a deterrent, I now understood that each song had a slice of the past inspiring it and that I could get behind! The wording does get somewhat literal and plain in places but I now find myself enjoying that aspect. "Lead the charge, our leader has entered the battlefield". There are plenty of un-poetic, descriptive wordings at play like this but when its lined with dates, names and locations you have to admire the dedication to keeping it accurate. Ive ended up singing along on many an occasion!

Joakim Broden's mighty and anthemic charge as a frontman is fantastic if not flawed. His deep voice in spoken sections can sound a fraction goofy but he knows how to deliver the energy. With power and conviction in his gruffly sung voice he constantly elevates alongside the music to create ear worm hooks that you just can't shake! Behind him the music is especially energetic and beaming with a triumphant might. Its Power Metal that leans on thicker guitar tones, classic Heavy Metal shredding and a delightful weight of symphonic keys that back with choral voicings and synths.

With the driving percussive force of Dahl, many of these songs move forward with a rocking tempo, cramming in a lot of sound. The rumble of textured bass lines creates a sturday foundation for tandem guitars to interchange colorful licks and variations over the top of power chord chugging riffs that batter in time with the drums. Its a big and bold sound always lined with a symphonic glow from the keys and just about every song encounters exciting breaks from the verse chorus structure.

Its mostly in the form of solos that shred classic wailing 80s Heavy Metal styling to give one goosebumps if your a fan of classic solos from the likes of Ozzy's guitarists. They are bright and beaming, colorful and played flawlessly. I also hear echos of Judas Priest in the solo's but I'm sure that's probably whats to be heard in a lot of Power Metal considering it developed from that sound. I also hear a now toned down Dimmu Borgir on the albums last Metal song. Its lavished in hysterical singing, horns and trumpets, the ramped up energy has some similarities to their Eonian.

The album bows out on an emotional note as a choir sings the memorial poem In Flanders Fields by John McCrae. The singing is simply gorgeous and ends the whole experience on a very humbling note. I absolutely love this record! I have had so much fun with it and will continue to spin it for weeks to come! I now feel rather incentivized to back track over Sabaton's discography. This album ticked so many boxes for me on things I like about Metal music, it seems almost mad I had dismissed them as not being for me. Its the same old lesson, gotta open up and learn to love cause hate and negativity means you miss out on fantastic records like this one.