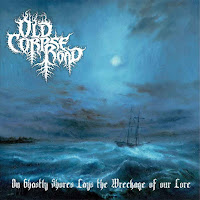 The allure of romanticized gothic tales and cryptic ethereal extremity was too much to resist. Always mystified by the early Cradle Of Filth sound, I wanted another slice of darkly dramatics from Old Corpse Road who live out that early 90s British Black and Gothic Extreme Metal sound so well. The group are at it again, birthing violent surges of esoteric wonder as barrages of dense sinister synths malign sombre guitar leads. The band craft a great sense of scale and weighty meaning as the music sails through its epic ocean bound tales with a yielding pace and stormy might. Wild shrieks and shrill howls often peak the plunges into the bleak as thunderous slabs of metallic force make a mark on the otherwise rather melodic expressions of these moody tales.

In comparison with what I remember of previous records, the band expand their sound into folksy territory with tones of pagan acoustics and choral signing. Where the album blooms it reminds me fondly of In The Woods, Macabre Omen and the almighty Emperor in one instant, to name a few. It shapes up the album well with more shades of Black Metal than I expected. It sways with a good sense of flow as its lengthy songs pass through plenty of phases, embellishing extremities and finding plenty of musical relief as openings of calm arrive, often eerie and unsettled in nature.

On Ghastly Shores Lays The Wreckage Of Our Lore has a quality I completely overlooked until the routine of writing promoted thoughts of production. This recording is sloppy in consistency, dense and harsh at times with a muddy sense of clarity. This actually plays right into its hands. In the age of octane clarity and precision performance it derives character from its looseness, capturing a sound more identifiable with the era of this styles inception. Its made me appreciate its rough edges so much more as it brings one closer to the tale they are telling. That and the delightful sixteen minute track have made this one a fantastic listen these last few weeks.