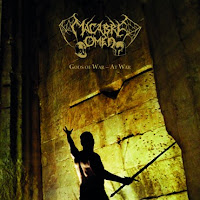 Purchasing a couple of records at a gig I went to recently, the seller encouraged me check out his band and I'm very glad I did! "Gods At War" is a swell Pagan Metal album that delves into Greek mythology, the Athens based bands own ancestry. We are used to seeing Viking Metal and the likes from Scandinavia, so its fantastic to find a gem like this where metal isn't as prominent in southern Europe and of course a different source of mythological inspiration.

Macarbe Omen have a loose, liberated flow to their music that doesn't stick to one distinct path to embellish us in ancient settings. Ever twisting and turning through champion riffage, soaring melodies and a barrage of clattering drums an experienced listener can hear tinges of many bands and styles teetering from Black, Death, Pagan and everything in between. The rhythm guitar muddies through hazy distortions and chunky riffs as the leads coarse over with inspired wistful tunes. Charging like a beast into battle the drums constantly bear down with endless blast beats and nimble batterings that can seep into all the creeks with its bellowing echo and reverb. The records voice comes commonly in two forms, shrill, distant howls reminiscent of In The Woods... classic "Heart Of The Ages" and burly lower ranged half growls. There's also a fair few helpings of Greek choir chants to drive home the records heritage. Its inspired and travels through its motions with plenty of spectacular moments that is helped along with an undercurrent of carefully placed symphonics.

Its a record to remember but not without its flaws. Although distinctively Pagan there isn't much beyond a handful of strikingly obvious moments and the song titles to define the Greek mythology theme, maybe in the lyrics but not much can be said of indecipherable howls. "Man Of 300 Voices" however does this with a lengthy acoustic interlude to set the tone. "From Son To Father" is where the record shines brightest. Epic in scale and tone we are lavished with inspired lead guitar melodies and a memorable group chant chorus to conjure the gods.

At just over an hour its a lengthy record, that can be felt as it draws to a close. Eight lengthy tracks of which a handful do take their time to progression through the motions. The production is also a little slack and forgiving of itself. Although the fidelity is key to its atmosphere and ancient feel, the drumming can be overpowering and constantly competing with the guitars. Its a bit nit picky, but where this record aims high it achieves it musically with an inspired touch that fell short on execution.