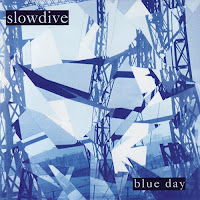 Digging into the wealth of knowledge the Internet has to offer, I found my way into the pre-Britpop Dream Pop / Shoegazing scene of now somewhat forgotten bands that had their moment in the early nineties. Slowdive's "Blue Day" had a familiarity and touch of Ethereal that sucked me in to this short, breezy dream of a record. Like a fair few bands of this scene their time was short lived, forming in 89 and disbanding in 95 however they have recently reformed with no new material. This record is a compilation of three EPs released before their debut in 91 and it doesn't feel like one. In fact the production and theme of the record is very consistent across the six tracks.

In many moments, they are most reminiscent of Lycia's dark, baron and freezing sound, however Slowdive have a warmth exuding through the soft, sleepy wall of sound that engrosses the listener. The guitars shimmer in the distance, illuminated through odd, layered guitar effects and distortions that despite seeming harsh in an analytical sense, are inviting, soft and hazy as they drift through their own web of reverb and echo in a mesmerizing persuasion. A warm and thick baseline holds a steady progression under the atmospheric soundscape and the drums work up some energetic beats that get displaced in the best of ways under a wall of sleepy noise. They are buried and muted to great effect. With two vocalists there are some double tracked moments where the duos excellent chemistry comes across almost as a singular voice soaked in reverb. The two both have a soft lucidity that gives a very welcoming human touch to the music. Underneath it all some low, foggy synths brood and moan, soaking into the dense atmosphere with a powerful subtly.

For all that's fair this record suffers a little from its production, which on the flip side is a massive part of the positives in the bands sound. In all the haze and drone the clarity of most instruments feels a little lost and is without some oomph to reinforce itself. The mix is narrow as only the snare and hi hat breaks into a large portion of the high frequency ranges, it can be felt at all times. This could all be for the best though, this record has some fantastic moments with vast reverbs growing into an engrossing wall of sound that almost losses itself. "Shine" reminds me fondly of Autumn's Grey Solace and a few track are a touch mediocre but there is magic hear to loose yourself in here.