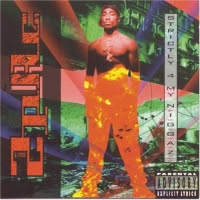 The late American rapper Tupac Shakur is undoubtedly Rap and Hip Hop's most acclaimed, celebrated and mourned artist. Shot several times and fatally wounded in 96 at the peak of his career the man has a legendary status in music with a body of widely influential work including a plethora of posthumous records created by other musicians who strived to keep his name alive and relevant in the post 2Pac world. In popular culture his "All Eyez On Me" and Death Row era is the most celebrated but for me its his first two, often overlooked, that mean the most. On "2Pacalypse Now" a young teenage Tupac charmed us with his social conscious, intelligent, intrepid flow and weightless articulation. The talent was raw, untouched and full of promise but the events that would follow would set him on a wild journey through the pressures of being a person of national interest.

Following a violent police beating and public criticism on his music from senator Dan Quayle, Tupac arrives at the microphone with the anger and frustration frothing at the mouth and with his unrivaled talent focuses it all into his words with an endless onslaught of rage induced rhymes to strike back. These where times when Rap music was shining a light on the systematic racial impoverishment in American society and being targeted for shining that light Tupac strikes back "And now I'm like a major threat, cause I remind you of the things you were made to forget". The record is loaded with sharp and concise rhymes like this which convey so much weight and meaning when you understand there context. Given the recent attention to racist police brutality and the outcry in response its as relevant as ever. "So we live like caged beasts, waiting for the day to let the rage free".

Head locked with the political system, Tupac's once observational lyricism heats up as he steps inside the minds of the characters he speaks for, taking things to the next level as he tells the struggles of ghetto life. It can easily come across as glorifying violence and is often misunderstood as such. Tupac see's criminals as what they are, people, and gets us inside the mind to understand the social and economic environments that create criminality in his neighborhood. He gives them a voice and does so with the help of legends Ice Cube and Ice T, as well as Treach of Naught By Nature for some brilliant and would be classic collaborations.

Behind an arsenal of eye opening lyricism the production is one to remember for being vibrant, aggressive, noisy and obviously flawed. Through its shortcomings it triumphs in making a memorable and firey backing to Tupac's inspired attitude. The beats are chaotic, layers of samples stacked noisily and at times incoherent. Theres similarities to Public Enemy's Bomb Squad style, and underneath deep sub bass lines groove in an unsettled and restless set of beats. The consistency is varied, some tracks sound like they are from the previous record and others, mainly the records closer have a Naughty By Nature vibe. It rough, raw and ambitious, with more polish it could of easily been a classic but feels rushed and results with an easily aged character to it.

This was the first Tupac record I brought, must of been over fifteen years ago and it was the wild fiery, red and green album cover that sold it for me. At the time I enjoyed it but it was many years later that my appreciation grew as I understood its context more. Interestingly, I can draw some comparisons to the southern Hip Hop style with the cover art, years before it became popular in the south. One other thing I adore about this record is the use of deep pitch shifted vocals like on "Something To Die 4". Its fantastic but hardly ever utilized, although Killer Mike's recent "Rap Music" does it to great effect. On another note, Tupac's most known track "Changes" is actually a leftover from this record. Having collected all the outtakes I can hear why, the beat just isn't on the same level as Tupac. Anyway, there's my thoughts, I adore early Tupac and this record gets me fired up and angry when I need it.