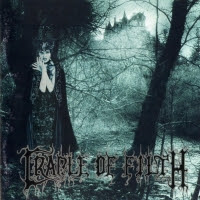 Cradle Of Filth, a band that polarizes opinions and attracts hate within the Metal community, are an English Gothic / Extreme Metal band led by front man Danni Filth who, over the years, has chopped and churned through many musicians and led the band into criticism for supposedly attempting to popularize the bands sound and image. Whatever your opinion is, there should be no denying that for a brief period in the 90s they put together some brilliant music that sounded unlike anything else. Dusk is the bands second, technically third due to a scrapped record, and undoubtedly their finest. One that any fan of Extreme Metal should check out.

Firstly Cradle are not to be confused with Black Metal, despite many similarities in evil themes, distortion guitars and shrill vocals, the musics core is drenched in romanticized gothic vampiric mysticism, dominating and guiding all aspects of their sound to create lavish fantasies of ancient blood soaked nostalgia. Their songs unfold through a series of repeated segments that move from one riff to the next with vision and variety, shifting between aggressive blast beats and slower doom tempos with all sorts of dark symphonic wonder in between. Evolving from start to end they mostly feel like journeys and stories.

One of the records defining qualities is the sense of lead and harmony that existence between the guitars and synths, feeding of one another and cultivating a shared vision. When they drop backwards with power chords the synths will step up with simple and inspired melodies. In turn the guitars do the same but with a style that reminds me fondly of Iron Maiden, fast commanding dual leads that have force, groove and a great sense of harmonized melody. With power chords and melodic leads the guitars can also turn to some metallic head banging grooves at times that work to great effect, amplifying the momentum of otherwise theme oriented music.

Cradle's trademark, Danni Filth's vocals, are at their finest here. His fierce, deadly, high pitched shrill screams turn many off, but for a fan his tone and delivery is spot on here and rightly so is used sparingly. More traditional screams and deep guttural spoken words reinforce the gothic theme and keep things ticking over until Danni will burst in with his surreal range. It reinforces the fantasy this record offers, sounding almost inhuman or beastly. Alongside him is Sarah Jezebel Deva's strong, evil, enchantress vocals playing on the romanticized themes. As well as having a stunning gothic voice she was one of the bands longest consistent members for fourteen years and has worked with a lot of other reputable Extreme Metal bands who often lean on the gothic tinge.

Dusk is spell bounding, vivid and dream like. Its atmospheres are haunting, chilling, ghostly and mysterious. Danni takes us on a ride through his twisted fantasies, the lyrics are poetical affairs with seductive temptresses of nocturnal persuasion. I can only sing this records praises. Further pondering on its strengths the albums production is very strong for 96. Its not pristine, the instruments are not perfectly crisp and without flaws but the balance between instruments is spot on and lets them find their chemistry for us to enjoy. Writing this I realize how fond of this record I am. Ive also heard their latest record is "return to form". Something I would love to hear this band do again.