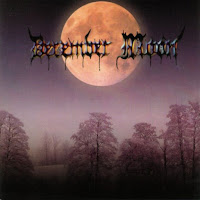 December Moon were a short lived English duo from Ipswich who had both been member's of Extreme Metal band Cradle Of Filth. Drummer Sarginson for a brief moment in 99 and lead song writer "Robin Graves", note the pun, through their best period in the early 90s. This was December Moon's only full length after a couple of tame demo's and its fair to say its the sort of record that gets lost in the waves of mediocre releases following the explosive controversies in 94 that brought this style of music to a wider audience, inspiring many musicians to form bands.

I found this album at a gig I attended recently, picking up a second hand record based on a recommendation from a chap who's band "Macabre Omen" impressed me greatly. Being so familiar with Black Metal, it doesn't take long to figure out a record like this. It doesn't have much to offer beyond a routine set of rugged songs that wouldn't be half bad if it wasn't for some glaringly awful vocals in the later half of the record. The hallmarks are all here, low fidelity distortion guitars, snarly vocals, clattering blast beats and rigid symphonic keyboards to add a raw spice into the flavor.

There's quite a few strong leads, temperate riffs, evil melodies and sinister themes at work, notably with a similar Gothic tinge in the vein of Cradle. It doesn't rub of as dark or particularly heavy to a seasoned listener and with a good sense of atmosphere the records knows when to give itself a bit of breathing room to let the distortions soak up the air. After three tracks the record shifts gears with a cold, and ancient synth track, then continues with another more crude and primitive Dungeon Synth instrumental accompanied by snarly, throaty screams that fail to charm. Its followed up by some hideous, shrill, howling vocals that dispel any magic on a sub par riff. Later it picks up with some, once again very Cradle like gothic female vocals which are subdued and muted in the mix, leaving what could of been a great moment feeling underwhelming.

The record trails of after that point with uninspired songs, leaving me with the air of disappointment. This one straddles the fine line and for a larger portion, drifts into obscurity. I'm reminded of "Diabolical Masquerade" with the snarly, distinguishable screams and upfront involved guitars but of course, falling short of that mark. The records production isn't much to marvel, fairly organizedwith a strong base presence, the drums at times can lack some oomph. Worth a listen if this era of Black Metal interests you, but there is better out there.