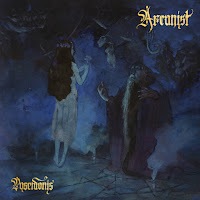 Fortune or chance, whatever your fancy, had me stumble onto this record that speaks to a particular niche I've been into as of late. Perhaps it is more likely this luck was bestowed by internet algorithms figuring out our inner workings from the mass of data our listening habits feed it. Akin to Old Sorcery and Jim Kirkwood, this French artist Arcanist steps right into a sweet spot, close to the middle of a cross section between the gloomy Dungeon Synth but more so psychedelic 70s Electronica. The latter here being described as "Berlin School" is something I will have to research into further.

For me, this record feels shrouded by its own mystique. Slow, brooding and atmospheric, the excitement of its animated crescendos feel sparse and rare. Their magnificence often eclipsing the magic of its soothing build ups which conjure a majestic calmness through luscious interweaving electronic instruments offering both texture and melody to engross with. Distilled in unsettled atmospheres of creeping mischief, its synth tones and keyboard notes echo a little in the vein of Progressive Rock, most notably a similarity to Contact and the nightly chill of Oscillotron.

Its two part, seventeen minute epic, The Death Of Malygris, bursts this welcoming temperament apart as we plunge into the horrors of nightly creatures. Woven percussion and dense buzzing baselines usher in nightlife Synthwave vibes, vaguely reminiscent of Dead With The Dead but vastly more artistic. Its a wonderful execution of elements that play out an eventful journey leading into to big thematic theatrics with its densely orchestrated introduction to the second half. Here, a brief crossover between the records opening vibes. It then dismantles itself into an eerie Black Ambient horrorshow.

Its final track leaves me unsatisfied, a curious experiment in tonality and melody, shifting from one distinct arrangement style to another, neither of which ever feel comfortable. It fizzles out to the fading embers of an airplane engine drone that ends quietly. As a whole, its a stunning adventure but one that ends with the adventurer lured deceptively, lost forever in endless caverns of ruin. On paper an intriguing way to journey a record yet for me it never quite works? A small quarrel, Poseidonis is remarkably wonderful album, a nightly, mysterious and esoteric journey forged through the fantastic tonal ideas of an era long gone by.