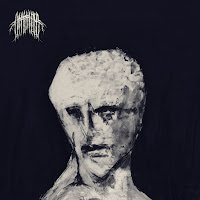 The journey continues, as it always does, now I find myself floundering blindly into a new scene. So familiar, yet built on a different tonality. The engulfing spells of Dark Ambient and nostalgic mystique of Dungeon Synth, channeled through shivering soundscapes, find a convergence on classic synth sounds resurrected from decades gone by. Known as Berlin School, my introduction has come through a musical darkness which I adore. Arcanist was my first and now I'm unearthing more of these broody plunges into the shadowy realms. Hinged on electronic tones, keys and modern conventions that are more often seen as fun and entertaining synthetic instruments than ones to conjure the eerie and ambiguous as Offermose does here.

With all that said, Stilhedens Tårn and its six chapters use this electronic force sparingly, acting more as atmospheric conjurings that journey somberly and morph into satisfying, driving swells of emotion. The haunting whirl of winds, unsettling ambiences and rustling sounds of nature nestle a rich sound design for its synths to bring haunting drones and chilling melodies too. The whole affair feels organic and natural as its potentially pristine synths are dressed down with an aesthetic tarnishing to ground the music in an earthly feeling. It does come in degrees though, Sjælens Ruin finds itself morphed midway by tight synth arrangements, playing out woven around a steady and simple percussive groove of snare and bass kick.

Much of this record lingers on an ambiguous spot, lonely yet beautiful. Meditative and broody but never drifting to far to the bleak, its poise hints at something devious with discernible human voices creeping into the backdrop on occasion. It all unravels with Tvillingeflamme as the pains of a despairing voice are muffled under a sinister vampiric synth. The arrival of a demonic voice and sounds of strikes paints a torturous scene in the imagination as the flame of the song flickers out with a funeral macabre air to it. A stunning way to seal off a wandering set of mysterious musical spells.