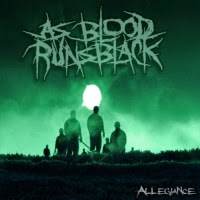 As Blood Runs Black are an American Deathcore band who formed in the early years of the Deathcore scene and dropped this, their debut album, at the peak of the genres popularity in 2006. After giving this one a spin during a work out today, I felt compelled to talk about it. This is one of the better sounds to emerge from the scene that would become plagued with mimicking bands and a flood of mediocre music.

The groups sound leans much closer to Metalcore and Hardcore than its Death Metal counterpart, what is "Death" about it is rather sonicly visceral and full on than anything remotely Death Metal, this is often true of many Deathcore bands that have an abrasive sound only similar in tone and aggression, not often in mood or substance. The heavy side of their sound comes from the aesthetic and songwriting where these typical Metalcore style songs break away into slamming, pummeling breakdowns with simplistic grooves and machine-like drumming that rattles away with exceptional precision, and lots of use of triggers, the end of "My Fears have Become Phobias" being an example. These slams and breaks are accompanied by a solid vocal presence ranging from snarled screams to forceful guttural rawrs, and the occasional gang shout.

Although they will be more noticeably be defined by these characteristics, the group write decent Metalcore leads, with memorable riffs making use of melodics and pinch harmonics that ads up to create exciting and aggressive music. My problem with this album is its lack of substance, after the first three songs the group change the mood with a gentle instrumental "Pouting Reign", a song that lacks any real progression or musical ideas, and from this point onwards the Metal tracks never really live up to the promise of the first few, recycling the same ideas, or trying things that just don't do it for me. Decent record, great sound, but a lack of depth in the songwriting department.