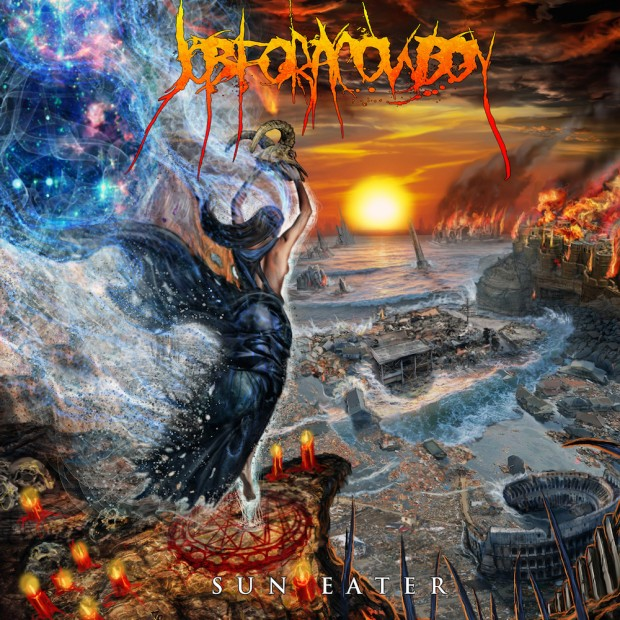 Job For A Cowboy are an American Death Metal group who made a lot of noise in the Deathcore scene with their 2005 debut "Doom", an EP that personified some of the scenes best qualitys. It created a buzz around the group that quickly gained them momentous popularity. The release of their first full length "Genesis" in 2007 saw the group break into mainstream charts while simultaneously dropping the entirety of there Deathcore roots for a pure Death Metal sound. Speculation would lead me to believe this was probably the plan from day one, to use a trending scene to gain popularity and then write the music they wanted to. I don't think theres anything wrong with that, and their fan base has certainly not revolted because of the transition, but for me it was a disappointment to see one of the finer Deathcore bands turn into another unremarkable Death Metal act, similar to what happened with Annotations Of An Autopsy.

Sun Eater seemed intriguing and promising at first, Cowboy deliver a composed and more progressive sound tinged with a touch of Black Metal in the guitar chords. Favoring layered and detailed compositions over pounding brutality, the opening track "Eating The Visions Of God" set the tone for a lush sounding record where anything could happen. The production is outstanding, crisp, dense guitar tones. A balanced drum kit with a bass kick and snare mixed to perfection. The bass was the highlight of this album for me, sounding thick, bold and melodic it continuously came to the forefront, pounding out grooving progressions and high pitched notation that added an exciting dimension to their aural aesthetic.

As the album unfolded, and after several spins, it has become quite clear that this record isn't for me. As much as I enjoy and appreciate the technical aesthetics, the music itself is lacking. With the exception of maybe one track their was very little captivating or arousing. Track after track wandered through purposeless themes that pounded out all sorts of technical riffs, rhythms and solos that failed to spark my imagination, I am left with very little to say about "Sun Eater", my disappointment has left me wondering if this kind of music isn't doing it for me anymore.