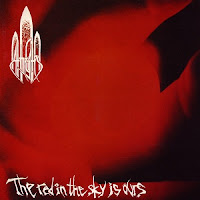 My recent enjoyment of their latest effort, To Drink From The Night Itself, prompted me to finally get around to checking out a band held in high regards among the Metal elite. The Sweedish outfit have a near perfect score for this record over on the Encyclopedia Metallum. Its an ugly, gritty old school Death Metal record that does little conventional to charm and much experimentation to conjure a dark, broody wallowing atmosphere that would undoubtedly been more impressive in the context of 1992. Even if I Cast my mind back to the likes of Cannibal Corpse, Morbid Angel, Decide, Death, Hypocrisy and fellow Swedes Entombed, I couldn't specifically say why this record stands apart but I do have some hunches that become obvious on inspection.

Firstly the limited production ability of those times doesn't overwhelm us with thick, overtly loud and punishing guitar tones. Instead the instruments feel rather separated and sparse in comparison to what would of been common at the time. The result of which is music that's far less nauseating to follow and lets its melodic streak flourish in a limited sense of the word. It would be another two records before they would be associated with the emergence of Melodic Death Metal pioneered by Carcass. Here on The Red In The Sky Is Ours there is clearly an inclination to melody in its darker form over blunt force tonality and primitive rhythms.

After just a couple of listens it becomes very clear At The Gates are not trying to dazzle you with simple brutality, crushing grooves or bombastic syncopation. Many of the riffs feel non-circular and linear with some drawn out grinding leads and tremolo picking sequenced in shorter arrangements that cycle swiftly. The result is a spectacle of perceived oddity. With repetition it grows in vision yet the music always falls mercy to strange moments of unconventional riffs that stop the music in its tracks with drop outs between its notes. It is also characterized by the inclusion of folkish violins that both chime in and play linking interludes between songs. As stated before they don't immediately feel natural but end up making sense and leaving a memorable mark.

The unusual and strange runs deeper than its observations. The mood and tone of the record has vibrations unlike typical Death Metal. It leans towards atmosphere when its brooding tracks can culminate in layered guitar leads and violins that feel more visionary than primitive. But what is its vision? I am still unsure but I know it is dark and dimensional. In other times it drifts to the Avant-garde as its baselines plod to the forefront with a murmurous dance. The drumming arrangements seem to flop over from the battery of pounding atypical grooves into experimental sporadic shuffles of madness mostly helped on by a sloppy outdated recording aesthetic.

Its clear the group attempted to write music that's complex, challenging and subverting norms within a subversive genre that has quickly established some boundaries. It has also produced results in doing so. A mysterious atmosphere brews through its endless string of experimental riffing that is continuously shifting, evolving, unwinding, providing delight and a unique mood to indulge with. Each listen uncovers another secret as one slowly dissects the arsenal of experiments crammed in behind the red haze of its ambiguous, red sky cover art.