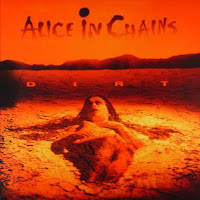 Dirt is one heck of an iconic record. It kicks of with a frightening scream as an eruption of tempered guitar chugging kicks off their most famous song, Them Bones. It jumps straight into gear, a mastery of atonal riffing as the chilling lyrics about ending up as a big old pile of them bones rock the chorus with a morbid honesty. The grungy dark metallic tone is set and Staley will go on to haunt us with some despairing lyricism and chilling performances on this record. Released later in the same year as Sap, the Seattle grunge giants Alice In Chains return with more Metal inflection and a leaner iteration of their unique identity established on their debut Facelift.

After a lightning start the album rolls into a slick run of songs. Tight guitar grooves stitch together beautiful eruptions of Staley's infectious singing. He soars above with the albums best hooks in its opening numbers. He is illuminating but on inspection a lot of darkness emanates from his harrowing words. Getting past the aggressive riffing of Them Bones and Dam That River we start to slip into moodier atmospheres, culminating with the frankly depressing Down In A Hole. It is a beautifully sad and hopeless song. Sickman offers more wounded lyrical fragility as some choppy metallic riffing shuffles its way in and out of an eclectic song. Its defeatist, the "what's the difference ill die" lyric so disheartening given his demise. Its a theme throughout.

Just when you think it can't get much more interesting the album pivots to anthems as Rooster and Junkhead both play with the mastery of tingling build ups that erupt with iconic choruses. "Here comes the rooster!" and "Whats my drug of choice? Well what have you got?", still gives me goosebumps all these years later. I especially like the guitar solo on the later, a simple complimenting melody to peak the song. Its a classic lead you always find yourself singing along too. With title track Dirt more gut wrenching lyrics and electrifying music is bestowed up the listener. Jerry Cantrell has an absolute arsenal of riffing ideas that keep everything fresh and interesting from start to end as Staley drags us to the depths of his self loathing and despair.

Either side of the Black Sabbath Ironman skit track Ironglad, we have a two tracks you might say are a mediocre records gems. Even as songs you might put at the end of your favorite list they still deploy interesting and unique musical ideas to illuminate them in the presence of so many magnificent tracks. Angry Chair takes a darkened shadowy atmosphere and chops it up, shifting the music between different tones. The album keeps its intensity throughout and end on a soaring high with Would? It again just shows an amazing chemistry within these musicians and Staley once again steals the show with a gift to make is haunted words somehow catchy and infectious. Its monumental, an of the moment album that stands the test of time, bringing together the best of Grunge and Metal and making it their own.