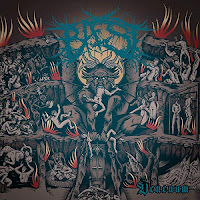 Not long on from discovering this gem of a band, the Danish Death Metal outfit Bæst return, monstrous as ever! Continuing with the brutal Mikael Akerfeldt era Bloodbath sound, they have assembled a collection of lean and powerful, fist clenching tracks to crush and menace listeners with its evil guitar riffs and gut wrenching demonic screams. Broken up only by an equally mediocre Spanish guitar interlude, like before, the record marches through its punishing line up of songs that hold together a brutal atmosphere. Either thumping steady tempos or thrashing hardened sprints, its deployment of intensities always result in gripping gruesome ride through the carnage.

With Nihil the lead guitar emulates Egyptian vibes similar to that of Death Metal legends Nile. Its a true moment of distinction, its winding, unraveling guitar lead is tantalizing and the brooding atmosphere birthed is something to remember. As Above So Below achieves something similar with less of a cultured direction. Again its lead guitar slowly unwinds in a gratifying manor as the song takes its time moving into a crunching dash of grinding aggression. Ending on a Bolt Thrower cover was a nice touch. I don't know the original but the flavoring of this bands aesthetic seems to work wonders. This feels like a steady improvement upon their debut but I think it would serve them well to land on something to stylistically separate them from Bloodbath.