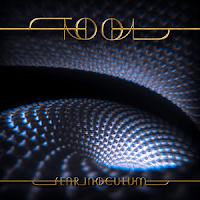 For many fans its been a feverish wait. Thirteen years since 10,000 Days the Alternative and Progressive Metal juggernauts return with a might eighty eight minutes of music. For me its been a matter of months, having only dived into their records this year. It was a slow process to come around to their genius but a sublime performance at Download Festival won me over. Being new to Tool, Fear Inoculum is just another chapter to my ears, only the crisp audio clarity explains a thirteen year gap. Its most technically impressive fetes feel like a band continuing to inch forward but large sections of the music stagnate on the workings of Ænima and more so Lateralus.

Its ten tracks can be split into two halves. Firstly five interludes of musical quirkiness, noise and ambience experimentation that drifts in and out of focus with little to note of. Chocolate Chip Trip does however muster much excitement from Danny Carey who plays an animated drum solo over the looping synths playing tonal melodies in an odd time signature. It could of been an indulgent guitar riff, however performed through the cold mechanical synth tone it is a stiff and disenchanting tune that would drive one slightly mad if it were not for the impressive, dexterous percussive display.

The other half consists of lengthy tracks ranging from ten to sixteen minutes. Two of these, Descending and Culling Voices excessively elongate a minimalist approach that has the scenic, sprawling journey of a Tool song stretched to its upper limits. Descending does have some beautiful guitar work in its mid section, a dazzling synthetic conclusion but takes a lengthy meandering walk to get to its powerful moments. Much of these two songs feel dragged out and thus any suspension and build up gets fizzled out, Culling never really getting of the ground at all.

The title track and Pneuma are fantastic, sprawling songs mastering the suspension and tension that it so delicately holds close to frailty. The records best and longest song, 7empest, reeks of Undertow in all the best of ways. Its psychedelic bells prime the atmosphere for a resurgence of crunching Alternative energy and anger to lead the music into lengthy guitar lead tangents of textural solo playing and technical riffing that eventually births the equivalent of a break down. Its utterly riveting and indulgent, the sort of music you want to let wash over you. Over thinking it may break the spell.

For the most part, Tool are sticking to what they know and crafting lengthy epics in the way only they do. In moments of reinvention they engulf the listener but its a game of hit and miss, when the songs work they are some of their best music to fate. When missing the mark the lengthy nature comes back to haunt as some sections drag into a frivolous lull. It is however aesthetically gorgeous, right on the mark. The bass guitar is stunning throughout and the textural chemistry between it and the guitars is a treat of its own, enhanced by a stellar production. Danny Carey gets a little quiet in places but when animated he fuels the music with another dimension of intrigue. Having warmed up to Keenan I'd say I considerably enjoyed his presences and loved his ability to charm in at the musics peaks.

Its such a curious album given the thirteen year absence. It plays little bearing to me though, having relatively fresh ears to the band, a little bias from decades of adoration many fans have this feels like a very flawed movement forward, certainly developing the Tool sound and forging new gems but also with a lot of unnecessary baggage. One thing I can be certain of is that this band have solidified much audio time from me in the future. I hope this is not the last work they create together. They still have more to offer.