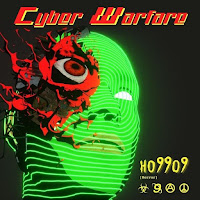 Less than a year on from one of last years favorites Cyber Cop, the vicious Punk Rock fusing and Hip Hop grooving duo Ho99o9 return with another vivid, conceptual EP that experiments with eerie cyber space hacker aesthetic. Opening up with Master Of Pain, gothic organs conjure an unsettling hallowed horror soundtrack atmosphere for slow tempo percussion to brood and then pivot into a riotous romp of synthetic guitar riffs fit for the pit. The back and forth is fantastic but this new gothic element sets a desire for more that is left alone on this one song. With Plexiglass a smothering, repetitive, obnoxious baseline fills the void akin to something you might hear on a TV commercial. A ridiculous mania of hurling frantic screams quickly stops this in its tracks as it turns up the intensity alongside scratchy discernible noise. At this point it may be hard to stomach for many a music listener.

Shadowrun slams into the Punk energy with fast and energetic guitar riffs, burred screams and pummeling drums. Its ecstatic and highly intriguing as the distortion and production techniques mask much of the instruments in layers of unusual aesthetic. From their the good songwriting emerges as the song leads into a fantastic closing groove played twice over. The end of the song introduces a layer of technological theming as a pitch dropped voice talks of internet connections. There is a few other bits like this but they fail to be interesting in my opinion. The next few tracks brings out the mean and gritty raps, delving into gloomy, dangerous street vibes akin to similar songs heard on their Horrors Of 1999 sophomore EP.

F.O.G. wraps up the record with some serious metallic stomping and tight drum patterns not far from something heard on a Extreme Metal record with its tight double pedal working. The song gets progressively heavier and distorted synths lead up to a ridiculous climax that maybe falls a little short of its intention. Overall this record is another fantastic chapter in what I hope will produce more of this paranoid cyber theming. Its not reached quite the peaks of Cyber Cop but it has produced some remarkable songs once again. This band are very much in a stride and I find myself dead excited for whatever it is they will do next.