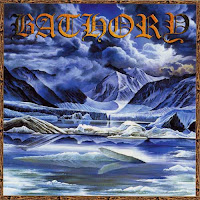 Another epic journey concludes as we embark on Quorthon's final works, essentially a double album that rekindles the flames of old, having lost his footing through the nineties. Sadly we may never know where he would venture on from this high point, his untimely demise coming just over a year on from the release of Nordland II. Supposedly linked to heart conditions it is often speculated that Bathory never toured for this reason. At this stage of his career though, he was truly a one man band, not only writing but performing all the music that makes up these records. Both are of the same studio session with little distinction between its two halves. It made sense to write about them together in one single post, so that will come next and for now we will focus the journey this infamous artist has taken us on to get here.

Starting out in the mid 80s, the early records are gritty, edgy and ambitious, pushing boundaries which seem tame and cheesy by today's standards. That is precisely the legacy though! With The Return, many ideas emerge that would become staples of the Norwegian scene in the 90s. Its not until Under The Sign Of The Black Mark that something special sparks. Still hammering out the extremes, his songwriting elevates, outlasting the gimmicks and giving us a glimpse of whats to come in the next few years. The introduction of synth on Enter The Eternal Fire also a remarkable idea, a clear traceable linage to the many Symphonic Black Metal bands yet to come.

Blood Fire Death marks a true stride of genius. Clearly growing as an artist, the Nordic inspiration of his heritage and Viking roots brings fresh, original ideas to Metal. It all flourishes with a pivot to focus on this spirit alone with the mighty Hammerheat, putting Quorthon at the heart of two big musical movements set to evolve over the next decades with him practically checking out and pivoting to Thrash Metal during its decline. It is this era that highlights something forgivable in the early days, sound production. Whatever the reasons, the harsh abominable aesthetics hinder much of the output moving through the 90s. Its been a stain on much of the music, with Blood On Ice providing just a little relief along the way.

Fortunately the Nordland saga is finely produced. Still a little harshness lingers but the two have a fair aesthetic for music we will talk about in the next post. One thing is for sure, early Bathory is essential listening for fans of Black Metal and Viking Metal, those first five records plant the seeds of so much music to come. On a personal level, it was really fun to get back to these records, rediscovering some fascinations from my youth and getting a much fuller picture of a patchy career with ups and downs, ultimately ending on a high note!