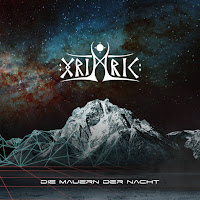 My curiosity in Old Sorcery's use of retro synths had this artist recommend to me as a link between Dungeon Synth and old school electronica, something that I don't think bridges the divide but I see the connection. Grimrik has been one of those instantaneous connections that needs little explanation however its darkness is of a different breed in my opinion. Die Mauern Der Nacht, translated, "The Walls Of The Night" has deep and lonely astral vibes of unending exploration through the dark abyss of the night sky. The synths that make it so brood and meander on the endless mysteries of the cosmos with an undercurrent of eeriness manifesting in spooky synth tones and puzzling melodies that conjure its peculiar position.

Its slow, atmospheric, taking its time to unravel as arrangements of buzz, sine and triangle saws work in tandem. Sprawls of classic textures sweetly stitched together over airy choral synths and murmuring baselines conjure the sense of vast distances between stars, the unending voyage. In doing so the album is structured as one seamless piece of music, cut into smaller fractions. Its events are sparse as many tracks explore the bare bones through minimal layers of sound, drifting to the next movement, often given a little gusto through quiet percussion, which looks to do little beyond creating a framework for pace with simple bass kick and snare arrangements.

Its gleam and shimmer is charming but musically the record is quite uneventful and sparse. On one hand it plays into the concept, on the other it does get a little dull for this listener as its tone and temperament is one I have explored before with the likes of Oscillotron. On that note, this theme too I have heard through the likes of Arkhtinn and Darkspace. Its the same slice of sound that others have smothered with satanic aggression in the form of howling screams, shredded guitar chords and pummeling drums. In the wake of all that, I've found this flavor a little lacking.

In the opening phases recurring melodies lock it in for a slow but steady pacing but the music never crescendos and slumps in the latter half as songs take on a cinematic flavor with string led compositions brooding on a temporal rhythm. The lack of spectacular hiders it. As much as I love these star struck nebula vibes, the music never evolves beyond much of a mood setter for my taste. Great as background music but after a couple of spins it felt dull to give my full attention. Definitely a worthwhile check out but something I might not come back to until a long night time drive home under the those walls of the night sky.