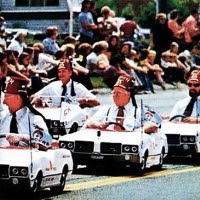 The Dead Kennedys are a legendary American Hardcore Punk group from California who developed a large underground following in the 80s. They had a short lived life-span, forming in 78 and disbanding a year after this record having become disillusioned with their own music scene that no longer represented what they stood for. They were involved in a few controversies but time has served them well, their music and legacy often held in high regard. I was introduced to them around eight years ago and I knew one day It with click with me, and that's what happened! Listening to Black Flags "Damaged" got me in the mood for more Hardcore Punk and I picked out this record having recently learned about the HR Giger artwork controversy that took the band to court following Frankenchrist's release. I can't believe its taken me so long, but now I adore this band.

This record really sucked me in, Its got a lot of energy and quickly I found myself running and working out to it, making the most of the exuberant, youthful energy the music and lyrics filled me with. It didn't take long understand their sound, there are some very distinctive accents that flavor the Hardcore Punk sound. Slower tempos and guitars leads with a western flick vibe make there mark on the songs flirting with tinges of Surf Rock and Psychedelia in between its aggressive and angry Punk core. The creativity flows freely through a track listing of distinct songs with variety in plentiful amounts. Its either riffs, vocal hooks, guitar leads or Biafras politically and socially charged lyrics, each track has a distinct quality and from start to end the group roll out brilliant ideas one after another, even extending to interesting song structures.

The records production does a lot for it. The guitar leads have a raw and hazy tone that comes to life in a recording that fills the space with a big hall feel, creating a ton of atmosphere. The drums and vocals feel more contained and muted in comparison, but its a rocking chemistry and the bass is gorgeous, deep and tonal, rattling and pounding away, often leading the march and throughout the album its very audible, its texture contributing a thick backbone under the spacious guitars. Even some Mexican horns crop up in "MTV Get Of the Air" record, alongside the western guitars they fit right in. The following track "At My Job" drops the guitars for a big synthetic saw wave lead emphasizing the horror show circus vibe of the track. Again, it fits right in.

Whatever the Dead Kennedys set out to do its done with style and substance and the record is littered with inventive approaches, especially front man Jello Biafra who's charged and thought provoking lyrics come wrapped in a variety of deliveries that range from driving sing along hooks to moody theatric play acting. Everything about this record was a delight and I still can't get enough of it.