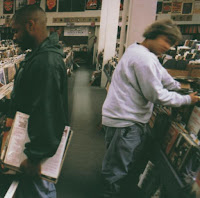 DJ Shadow is an American producer from California who's debut "Endtroducing..." has landed on many "top lists" in Hip Hop music. Credited for establishing Instrumental Hip Hop its often held in high regard as an important and influential record. Having not given it much attention beyond one or two listens in the past I decided to give this one a go again and after much time spent enjoying it I have to say retrospect has me at a disadvantage.

Being familiar with many of the characteristics this record may of helped to shape and inspire, there are a few traits its posses that I might take for granted. The instrumental aspect was a first at the time and many of the techniques used in production are so commonplace now you have to put yourself in the mindset of 96. DJ Shadow as a lot of unorthodox sample material throughout the record, even including Metallica's "Orion" on "The Number Song" and scaling back from the accompaniment of an MC he pushes for daring and unique sounds leaning towards Jazz, Soul and Psychedelia.

The sampling, cuts and arrangements are captivating and progressing lucidly with a free flow as DJ Shadow lets the sampling art-form do so much more than the stagnant repetition were used to. With many layers of samples each song can journey through an idea while changing form and evolving thanks to the intricate detailing of sounds and shifting between different samples which fade in and out of the tracks effortlessly, creating organics through traditional rigid music.
A quote from the record itself, something along the lines of "The music's coming through me" summarizes the record in a nutshell. Whats so remarkable is how lucid and organic the chemistry in the sampling is. Hip Hop has often sliced great moments, or reinvented them with new words and a new groove, but here on this record the original songs are barely reconcilable as the choice arrangement and reconstruction takes new forms that don't resemble the origin.

Despite now "getting it" I feel that the records diversity in theme creates some less favored vibes and moments. In the jazzy chilled out, laid back Trip Hop moments there are timeless tunes. In other songs the mood shifts rigidly into less engaging songs that break up the flow. Its a loaded gun with plenty to offer, but some of that just wasn't quite on my wavelength. Its also interesting to read about how well this record was received in the UK considering this record breaks down Hip Hop in similar ways to Trip Hop which was flourishing at the time. Anyway, terrific record which I can really appreciate, I'm hoping the less favored moments will grow on me with time.