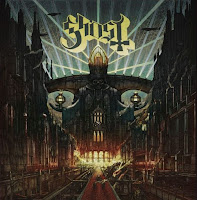 Ghost have been one of the most impressive Metal bands I've heard in a long time and I'm not alone with this opinion. Critics and fans alike have been praising this band since there debut "Opus Eponymous" and the band has rapidly been growing their fan base and praise with striking stage theatrics and music to match. I discovered them not long before the release of their second "Infestissumam" and this new record "Meliora" has been my most anticipated record for some time.

Defining Ghost's sound with words may be relatively easy but you have to hear it for yourself to understand the level of execution these musicians are putting into their art. Side stepping from the atypical progression of Metal music Ghost pull influences from the earlier era's of Heavy Metal and satanic themes in music with a tasteful re-imagining of ideas portrayed by extreme bands of that era. There's hints of Doom Metal, Psychedelic and Hard Rock, even Progressive Rock at times and it all comes together with a focused vision of dark, satanic worship in the form of bright melodies and lush, inoffensive instrumentation. Further playing into the twisted vision the band remain anonymous as "Nameless Ghouls" and their singer "Papa Emeritus III" replacing the former with each record. The anonymity wasn't of much interest to me, however it is speculated that the Swedes are a "super-group" of sorts.

Meliora is a gorgeous sounding record that finds the group playing down some of the metallic, riff oriented elements of their sound in favor of melodies and instrumentation that will have you watering at the mouth. The production captures these instruments with color, clarity and a chemistry that lets the harmonies between instruments spread like butter. Behind the glorious aesthetics the familiar theme of satanic worship is dressed up and delivered through Papa Emeritus soft persuasive voice, often subtle and suggestive with his lyrics he delivers hooks and passionate sing along lyrics with an evil subversive undertone that gets stuck in the mind.

The instrumentation is the bands most diverse, ambitious and on point so far. Across the ten songs they hit a remarkable range of ideas, themes and variety that can be heard through a thicker range of sounds, from sparkling acoustic guitars to the luminous pianos, enchanted choral vocals and eerie organs, everything has its moment in the spotlight. The lead guitar rips dazzling solo's that let Progressive influences blaze the trail on "Mummy Dust" with an almost synthetic quality. The drumming marches along with the flow of the tracks and punches a lot of pedal kicks and cymbals together to mark the rhythmical hits in the notation. Even the bass guitar gets its moments to show off its snarling raw texture as it bounces and grooves with the lighter guitar distortions utilized.

The record flows from start to end without a dull moment, and although there may be some tracks a little more favorable, it will vary from person to person as every track has wonderful vision and execution. "He Is" was undoubtedly my favorite, an spirited worship song fitting for traditional christian song if it wasn't for the lyrics, on this track its Ghost at their absolute best and there's little this record could of done to be better, however I think we are still yet to see the best of this band who are quite simply killing it right now. Can't wait to see them live again, and already I'm excited for what the next record will bring, but far from done with this gem.