Digable Planets "Reachin' (A New Refutation Of Time And Space)" (1993) 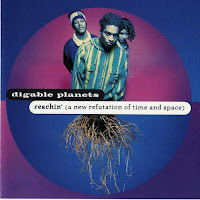 Reading a top 90s Hip Hop songs list cropped up an unheard of group at number two. Its somewhat of an oddity to find groups from this era that escaped my radar, but lo and behold here was Digable Planets and the super slick track "Cool Like That" with its big groove baseline and the Jazz Hop vibes similar to "A Tribe Called Quest" and the Native Tongues. They are a trio of Rappers from Brooklyn who signed to Pendulum in 92 and this is their debut, which had the hit single from the list.
The record's a smooth, gentle breeze of laid back jazzy vibes blowing in the wind as the trio deliver soft, warm and welcoming raps of expanded consciousness and social political awareness. The trio all have such friendly and polite tones with chilled flows that make for the most inoffensive rapping I may of ever heard. Lyrically its a little inconsistent, in some moments they nail the vibe with memorable lines "We be to rap what keys be to locks", smart and intelligent lines but often it doesn't come of with the same finesse. With a lot of witty lines to burn through it does tire a little as the record draws on.

The beats have a spark of magic, the epitome of the classic 90s sound with a current of cool jazz struck a nerve. Undoubtedly some of my favorite beats Ive heard this year, especially "Jimmi Diggin' Cats" sampling of Kool And The Gang's "Summer Madness", a song that's in two other I love, Ice Cube's "You Know How We Do It" and DJ Jazzy Jeff And The Fresh Prince's "Summertime". There's many terrific uplifting samples and a great selection of beats that aren't to overbearing. Unfortunately I felt the final tracks on the record drifted in mood and didn't have the same spark. My overall impression is that of a flawed classic. There's so much good to praise, but its also inconsistent and patchy too.