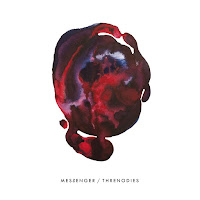 Back in 2014 I found myself sitting in a the pews of a quaint chapel in London, humbled by this band who were opening for Devin Townsend performing his "Casualties Of Cool" record. After the show I picked up the bands debut "Illusory Blues" which won me over swiftly, perhaps being the most impressive Progressive Rock record Ive heard in recent memory and with time that impression only strengthened. Messenger have echos of the greats while standing on their own two feet and subsequently had me hyped for this release which promised more of the same, another seven tracks spanning 46 minutes it continues where its predecessor left off.

Opening with "Calyx" the group set the precedent for a collection of songs that seem so uninhibited by structure and form with music that unfold at its own leisure, moving through the motions with no urgency, creating an indulgence that starts with a calm and tranquil motif that's got a surge of unrest beneath it. With a calm before the storm a lone electronic lead brings us into a shift in momentum that leads to a grand climatic guitar riff that's got glory in its soul. The following "Oracles Of War" thickens the atmosphere with a galloping intensity and the guitars and drums thunder forward with classic prog organs laying the density. The momentum slowly unwinds into a lush calm of serene acoustics soaking in a soft ambience and light pianos accenting the soft, dreamy vocals of singer Lowe who shines bright in every moment of this record and takes it to some sublime peaks with his grounded harmony. For all of its lush tranquility, every moment flirts with a darkness that's forever fleeting, never surfacing and in its immediacy can sound rather sorrowful and sombre. As the songs flow and progress the whole affair becomes rather entrancing in an effortless manor that makes enjoying a breeze but analyzing becomes allusive as no part of its charm lies on one riff, melody or hook but the overall journey these songs draw you into. This is best heard in its strongest melodies which can often drop in from the quieter region of the sound, rather than being immediate and upfront.

"Threnodies" is another self realized and inspired creation that is perhaps a little bolder and more adventurous than its former. Again its persuasive with its atmosphere and draws you in closer when your not looking, which is part of what makes writing about it so hard. Putting music into words is a challenge but you can never do that music justice, and in times like this you feel as if you cant ever come close. The production is sublime, the instruments are rocking and vivid. Lowe's vocals are enticing, reminding me slightly at times of Thom Yorke, and the drums where particularly more expansive this time around. I adore this record, cannot wait to catch them again on the road and I'm sure this one will not tire like that last has yet too.