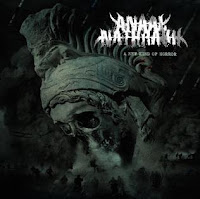 I first heard of this band through the ripples of the UK Metal scene as a contender for the Scandinavian Black Metal outfits who blossomed the genre, while us islanders had little to offer. Ive never paid close attention since their early records but felt an itch to see what they are up to. They have evolved, as has the times and with some truly extreme ideas. Its a Black Metal record at its core, dressed up in disgust and depravity as the Birmingham duo push their musical vision downwards with harsh menacing aesthetics to raise the stakes in this conjuring of decadent, violent filth.

Its a tried and true Black Metal record with flavors of the American scene but it grabs attention for the vile extremities that first confront the listener in a cacophony of blast beats and grinding guitars accompanied sinister string sections and other various assaults of dissonance. As it builds its presence I can't help but notice how distinct the vocal style is. It plays this way throughout the record, roaring screams, blunt and raw yet somehow decipherable. They constantly peak the volume for effect and quite often spiral out of control into literal primal screams of anger and hatred. It can grow a little tiresome given the unrelenting viscous force the music exhausts.

As the record gains momentum the aesthetic experiments play like torture. Maniacal sounds and shrill possessed singing akin to Mercyful Fate soar with ferocity. When we arrive at Forward! the sounds of Glitch, Dubstep and Djent collide in an obnoxious pummeling of groove aligned to the firing of machine gun fire and shotgun blasts. Its a riot and from that point everything feels a fraction behind this peak of insanity. The record then brings in some symphony and melody to soften the blow as some drilling tremolo picking leads, power chord arrangements and chugging Djent grooves take spotlight as the aesthetic overdrive becomes far more expectant.

A New Kind Of Horror is a real race of the cliff. Vile and malicious it pushes hard at the hardened listeners with its overwhelming flood of evil noise out to punish everyone in its way. It lacks moments of respite and without truly captivating melodies or riffs it circles its own waters, each song failing to reach some sort of peak or rise to wedge in the mind but that is preference and overall I think its a fair effort. Reminds me of Cavalera Conspiracy in ways as there are ideas here that also push things forward in an obvious way. Its a dense record, lots on offer, great if it clicks with you.