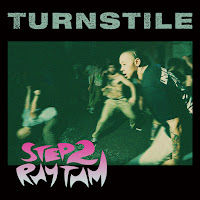 Kicking off with a flavorful shimmer of western guitar tint over big theatrical chords, Step 2 Rhythm gets moving with a lick fit for a 90s tv theme song, just energeized. It switches back and forth between this uplift and the grit of guitar throw downs as the Hardcore riffs shred their power chord grooves. Its the first sign of an eclectic direction for the band and in brief instances it rises again through exotic Metal guitar leads and the outro. Otherwise thats about it. Despite this direction potentially manifesting into what I adore about Turnstile, this short twenty minute EP doesn't quite have the energetic charm of is successor Pressure To Succeed within the Hardcore department, which it primarily plays in tune to.

The opening stir of emotions is to early in its infancy to become anything other than a notable derivative at work. This is a straightforward record for the most part. The band go hard on guitar led grooves of power chord chugging set to slam on the floor as the drums crash in with appropriate half times and the vocals cry out with fiery aggression. Its fairly atypical and the reality is these feel like the b-sides to a better volume of work. Canned Heat bangs when the slam kicks in with a big group shout. Bar that one moment much of the songs felt reasonable but far from the magic Ive heard so far on other albums. It leaves me with little to say other than its been a fun listen but not to much to take away in comparison.