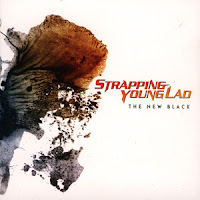 Its been a real pleasure to dive back into the SYL discography. Its been over a decade since I last binged through their records and now we arrive at the final chapter. Despite having a vivid memory of getting this album and listening to it on a work break, not much of the music has stuck in my mind bar a few songs. In a similar way to their Self Titled release, The New Black doesn't come close to the apex of City. Its essentially a Devin Townsend record shaken up with many spices of aggression and occasional comedic measures. Arriving straight of the back of Alien I suspect this record had much to do with filling contract obligations as Devin decided to disband the group in co-ordination with its release and their final tour as a band.

The record gets off to a roaring start with fast paced tracks. You Suck sets a tone for comedy that makes many returns as the premise of the song revolves around saying a band "fucking sucks". Typical Devin humor! The New Black has a slightly withdrawn approach, a fun yet aggressive template with plenty of stomping guitar grooves and frantic, intricate drumming that can go full pelt on the listener or focus on the musicality. The records crisp production strips back the wall of sound feel even though its a fairly bolstered sound, a collection of overwhelming collisions of noise where everything is dialed up get through but despite this, the record just feels lighter and that is probably due to its meandering second half where the moods expand.

In the first we have Wrong Side, a very domineering tack with its heavy synth presence and with Dev's soaring clean vocals it launches itself into Ziltoid territory which he was working on at the time. With Far Beyond Metal we have a studio version of an old live song from No Sleep To Bedtime. Its an anthem, fit for headbanging and giggles! After that the side of Devin we hear more in the solo material comes to light. Almost Again being a keen example, it sounds like Holgen had to really ramp up the drumming patterns to make it feel at home. One can hear the disproportion in balance as Dev's glorious singing pulls it in another direction. When he does erupts with roaring screams Holgen gets frenetic trying to match the increase in intensity, its quite impressive to hear him keep up.

Compared to the rest of their discography this feels like a clear ending point as Dev's other musical directions strongly influence the lengthy thirteen tracks. Its also a great example of how inspiration can be channeled through different aesthetics and approaches as many moments are interchangeable to differing intensities from the all guns blazing mentality SYL usually have. The big point to make is the obvious directional shifts don't detract from quality and give the album a depth in variety others don't. It also has a fair few unleashing of the signature mania where the music gets so loud you can hear the frequencies drown each other out in the wake of massive sub drops. Its a fine note to sign off an amazing journey on.