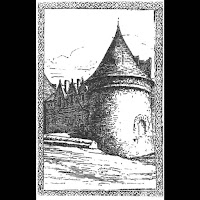 With this dingy eleven minute release we wrap up our deep dive into the realms of Old Tower. In conclusion I luckily started from the sweet spot with The Rise Of The Scepter. All that came before has been lacking in artistic maturity but showing promise as obvious experiments in Dungeon Synth ideals forecast a potential charm. Dark Outlands, being the predecessor, has more elements falling into place as its foggy synths pair up with pounding castle drums in the beginning. The oomph is sucked out of them in this low fidelity setting yet the Dutch artist will go on to master this approach within later records. This is the true first inkling of whats to come.

These four sings, stitched together, meander through simple constructs of dusty, ancient synth tones attempting to tap into those spooky, esoteric and nostalgic vibes and to be fair, it gets their in some stretches. Its linear, often led by singular melodies but it musters far more atmosphere. This is definitely the better of the "demos", even its deep and shadowy brooding voices pack more of a punch as they rumble ambiguously in the backdrop. It gets to a slow start though as crows squawking and owl hooting in the rain make for a haphazard transition. Its mostly unremarkable but a good tone setter for lonely nights in the cold of night, lit by candles in stone corridors.