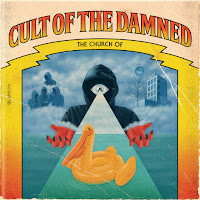 UK Hip Hop collective Cult Of The Damned return for a beef seventy one minute sophomore record of straight rhymes and beats. The Church Of is stylistically stagnant with their formula unchanged. 90s beats and a production style leaning to the dark, gritty, sombre tones suiting the obnoxious, braggadocios and often self depreciating rhyme schemes. The group deploy their words with a scarcity of hook and chorus, putting a lot of pressure on their verses to carry the album. The backing instrumentals trend towards a subtler roll of tone setting and atmosphere building as opposed to rocking banging beats which it does with a handful of tracks.

With such a large set of tracks the cracks emerge after just a few listens as the quality of rhymes appear to diverge. The mostly Wu-Tang free association style gives the Cult a lot of creative room for pages of clever, witty and pun ridden rhymes. The issue is this record is a book and quickly do the best bits feel sparse between mediocrity as the beats loose keenness in repetition. Sticking to their exaggerated, unhinged, sleaze embracing personas the lyrical creativity feels stale with familiarity. Individuals cadences and tone of voices don't move a budge. Still fun and expressive but drawn out over this duration it gets a little dull with the overall temperament unable to shift.

Pushing off the criticism, there is greatness to be found here. All the beats are solid, however it always seems to be the stronger cuts that house my preferred verses. Norman's Theme, Gung Foo, Step, Good News and the dark and gristly nine minute epic Henry Shots, all have great chemistry. Once again Bill Shanks and Tony Broke are on great form with the better lines. It would I've been nice to hear more of Broke who is absent on too many of these tracks. To wrap it up, The Church Of doesn't move the needle stylistically or thematically in any direction, so there are no surprises from a group who's style doesn't always embody the highest standards.