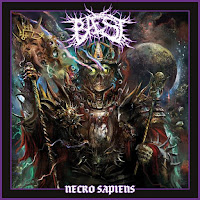 Released in March of this year, this attempted behemoth of Death Metal disgust, Necro Sapiens, managed to slip under my radar! In previous efforts I've described Bæst as the Danish Bloodbath for similarities musically but more notably for the dense guttural roars of Simon Olsen which mirror that of legend Mikael Åkerfeldt from Opeth.

At forty four minutes this third record has felt like a meaty affair on every occasion. Its search of grandeur ever-present as grueling themes play out with an unrelenting intensity. Reaching for the epic, its march of brutality is a grinding one. The music gasps for breaths of air while strangulated by the demonic roars of Olsen who drowns out any melodic refrains to lighten the tone. That intensity seemingly holding it back.

As so often a Death Metal record does, an arsenal of riffs is lined up for assault. Necro Sapiens deploys all forms, from evil melodic inflections to slamming pummels of chugging palm mutes with all in between. The bad news is the lack of originality or freshness. At this point in a stagnant genre, the ideas have all been heard before and the arrangements in search of greatness seemed to fall ill of its own medicine.

I can hear the vision, a careful composition of riffs exchanging brutality and dramatic themes with its unruly lyrics peering into wretched biblical filth of angels and demons and the scourge of humanity. Its all to be expected however it just doesn't click! I'm left with nowhere to point for an excuse, the performance and execution is excellent, the record sounds wonderfully rich and powerful yet with every listen these songs fail to muster that adrenaline charged excitement. I'm left wondering is it me or the music?