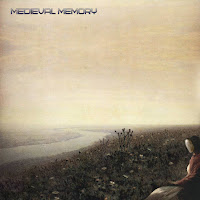 Straight of the back of the mellow indulgence Kyokan, we get another Izioq release that is also quite different from the norm. It turns out, this brief five track eighteen minute release is inspired by the intro music from my Hermitcraft episodes, originally composed by Jotun, a side project of Lord Lovidicus. Medieval Memory essentially rebuilds a similar pallet of 90s dance percussion and jovial rave synths, deployed in that untypical melodic style for these aesthetics. As a result, a similar spell is cast.

The title track, split in two parts, humbles with its shimmering lead melody adding a warmth and gloss to the underlying synths that jostle away rhythmically. The driving dance floor bass on the second half to see the record out is a nice hail to the club aesthetic. Its brief 70s Electronic lead instrument another nice compliment too. Between those two halves, the three parts of Just In Dreams sound a little less polished and without focus, residing in the duller arrangement of these synths.

Each track experiments with some compositional ideas and aesthetics, venturing its through the musical motions. Parts two and three seem to meander further adrift with less engaging melodies and arrangements. Its been a pleasant surprise to see this niche musical idea embraced again. However, without advancing the concept it has been a little dull for me personally, revisiting a style I once binged to death around ten years ago. Definitely worth a listen if your a fan of the Jotun project.