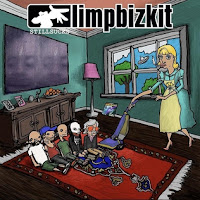 Its finally here! The album I thought might never see the light of day. Ten years ago with Gold Cobra, it seemed the Nu Metal kings were about to hit a groove with new singles being released in the following years. Interestingly, none of those them made the cut. The story goes that front man Fred Durst has been continually dissatisfied with his contributions, going back and forth to the studio, unable to finish the project. Its possible that much of the instrumental material here was ready eight years ago!
Its that creative divide the records struggles with, as much of what works hinges on Fred's lyrics which are mostly corny. The opening track Out Of Style has Wes Borland delivering his unique style with groovy chunks of guitar noise landing like punches as Otto brings the tight bouncy drumming and DJ Lethal fleshes out the texture with turntable scratches. Sadly its a fluffed opener as the doubt that delayed this record seems all too obvious. The verse rhymes are aimless and cheesy, finding no gratification with a hook or chorus either. Despite being corny, Fred nailed this twenty years ago with attitude and obnoxiousness. It seems that spark is long gone.
Fortunately the following Dirty Rotten Bizkit steers the overall theme to this "we suck", self deprecating notion that suits Limp Bizkit so well at this point in time. Still hated by many but adored by fans it works like a shield to deter a serious focus on what Fred is up to as you could write a book on the amount of silly rhymes he drops. Its all about having fun and Dad Vibes really leans into that. Its followed up by Turn It Up, Bitch which sounds like a classic 90s House Of Pain instrumental, of course the link here is self evident! They run the Hip Hop routine again with more beats and rhymes at the end with Snacky Poo, which might have the best rhymes of the record.
This side of the band and the overall theme converges wonderfully on Love The Hate as an oddball warbling bass noise rumbles under Otto's tight grooves. Fred and a guest play out a typical hater conversation about his band, steering it wonderfully to that "I listened to them when I was a kid" line. As it goes most the hate they get came from MTV generation kids that once loved them. Personally I never let go of that juvenile enthusiasm, there is just too much fun to be had with the classic LB!
Elsewhere on the record variety is found in droves. Barnacle rocks and roars like a Nirvana 90s grunge classic, deploying all the tropes of that style. You Bring Out The Worst In Me hails back to some of the bands lighter and melodic tracks while simultaneously deploying one of its grittiest grooves as Fred screams and Wes bludgeons his guitar. Pill Popper sounds somewhat like a Ministry track with its driving industrial snare drum. The variety here is fun and definitely on the nostalgic side.
Overall Still Sucks is fun because it has variety and the band don't take themselves to seriously. The lead single Don't Change stands out like a sore thumb tho. It seems it wasn't written by the band and that shows. The emotional angle and serious moody temperament just doesn't suit Fred at all. Other than a few blemishes, LB mostly walk the line well just having some good old goofy fun and banging out the jams!
Rating: 6/10
Email ThisBlogThis!Share to TwitterShare to FacebookShare to Pinterest
Labels: 2021, 6/10, Alternative Metal, Hip Hop, Limp Bizkit, Nu Metal, Rap Metal, USA
Newer Post Older Post Home