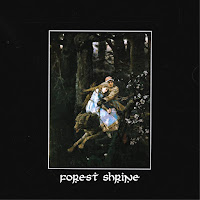 I don't recall ever hearing a record so suited to being labeled a Burzum inspiration. Right from the offset its distinct Casio keyboard tones resemble that lonely spell cast by classic Tomhet. The second song then does a remarkable job emulating the timeless gristly low-fi guitar tone that made Filosofem. The heart of this seven track record seems magnetized by the vision Varg had, with his searingly disparate and oddly spiritual music. Both with the chilling cold aggression of Black Metal and the yet to be named keyboard compositions now known as Dungeon Synth.

Forest Shrine feels like a convergence of the two, dealing in a nostalgia of both theme and one mans creativity. Its all there in the tone choices and composition style but loses sight, or perhaps never aims to recreate that peculiar esoteric loneliness Burzum captured. Instead, through its melodies and sense of scale, finds the more castles and crypts side of Dungeon Synth with big scores of synth notations drummed into action by loosely military percussive marches of driving snare rhythms.

As I dissect the record for "review" it becomes clear to me I've gotten hung up on the first two track and the resemblance to Varg's works. The second is the only use of distortion guitar and beyond them the album blossoms into its own thing for the most part. The melodies and general direction gather quite the upbeat tone with its militant percussion giving off castle and king vibes. One can see the vast landscapes of forests leading to the hill on the castle. It fondly reminds me of Sequestered Keep with far less of the jovial medieval vibes. All in all its a great little record to enjoy, however being so impressed by the opening likeness, I would love to hear more of that!