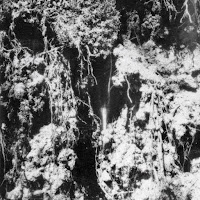 All to keen to explore this newly discovered Berlin School niche, I snapped up this side project by Offermose. Now, I feel a little burned by an impulse decision. What I initially heard at a glance alludes me through this dreary bleak experience that Den Sorte Død is. Translated to The Black Death, its inspiration makes sense of its glumly harrowing tone that hopelessly drifts through a sombre graveness. Track after track drones with an empty loneliness devoid of hope and wallowing in defeat.

This context has given me a greater respect for the record but before learning of this, I was somewhat dulled by it, having anticipated a more adventurous set of songs. Instead its a grueling journey of pale sorrow, a defeated human spirit trapped in perpetual misery, drifting from place to place with no uplift insight. The occasional swells of dark and menacing music gives a sense of seeing the horrors, carcasses piled high and the burning of bodies, a particularly grim endurance for any soul.

Without the context, these aesthetics gave me strong cosmic vibes. Atmospheric synthetic strings and meandering saw wave melodies painted the astral skies at night. Thus initially it reminded me more so of Grimrik. There is also a ghostly wobbling synth instrument suggestive of cheesy old school horror soundtracks. Because of this it all felt a bit empty, set in the vacuum of space with an eternally drifting nature. I've come to enjoy it more now, the ending of Det Tabte Slag being a memorable note as it descends into gristly and unsettled territory but otherwise I could of passed this one by.