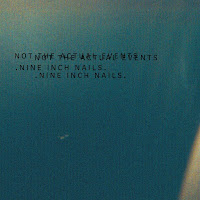 Nine Inch Nails, stylized NIN, are one of Industrial Metal's most successful and influential bands if not thee most next to Rammstein. Trent Reznor, the man behind the band, has been hailed a musical genius by many and over the years Ive made several attempts to get into NIN. I can hear his identity within the music however Its never clicked for me, I like the music but I don't get that emotional elevation. From my understanding of their early records this new EP is very much a fitting part of the bands discography and sound, this time with an ambient and atmospheric edge for the five songs included.

It may just be fitting that my lack of connection with Reznor leaves me with not many words to say about this record. Its temperate, mid tempo and easy on the mind with a couple of scouring moments where the guitars bristle up and Trent takes to screaming. The atmospheres are born of intricacies, subtle, unobtrusive instruments working around one another. Its powerful moments are downplayed and experiments with noise and reverb remove a lack of definition for a calming cohesion.

Each of the tracks have distinct and interesting ideas that come together well. The closer plays around with a big burgeoning distortion that smothers itself over the synths and slow heart beat of an industrial, mechanical drum machine. The underlying music is solid and for the most part revolves are repetition of simpler ideas. Its brilliance is in the production that carefully manages the emergence of many distortions, noises and oddities that arise between the intentional melodies and instruments. Its an impressive listen, took a little time to grown into but the familiarity exposes the inner workings of an interesting record and I find myself positioned closer to Reznor's appraised brilliance.